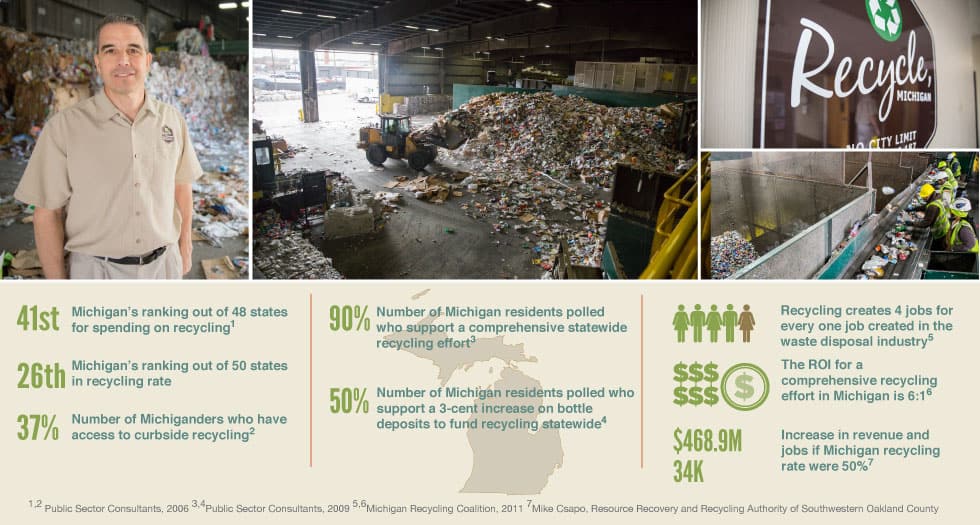 Along with trash, Michigan has buried dollars and jobs in landfills for years.

That’s despite a target set in 2007 in the State’s solid waste policy to achieve a 50 percent recycling rate in Michigan and 24 years of implementing Michigan’s bottle deposit law. While the bottle bill has driven a 97 percent recycle rate for beverage containers in Michigan, those containers account for only a fraction of the tons of recyclable materials thrown away by Michiganders every year.

“There is so much latent potential in Michigan’s recycling industry,” says Mike Csapo, general manager of the Resource Recycling and Recovery Authority of Southwest Oakland County. “We are nowhere near the state’s goal of a 50 percent recycling rate, and just the commodity value alone of reaching that level would be about $500 million, and that’s before any value is added by tapping into markets for recovered materials.”

Michigan ranks behind many other states in terms of overall recycling rates and has the lowest recycling rate among states with bottle deposit laws, according to a 2013 report by Public Sector Consultants.

According to Kerrin O’Brien, executive director of the Michigan Recycling Coalition, no one is exactly sure what Michigan’s recycling rate is.

“The number that is currently being used is a 14.5 percent recycling rate,” says O’Brien, noting that the number was derived from several estimates. “I don’t know if anybody has real confidence in that number. And just knowing that one number doesn’t really give us the kind of information we need to help guide policy and programs—it doesn’t tell us what is getting recycled, what is not getting recycled, what is being pulled out of the waste stream and what is still going into landfills that has high value,” she adds.

But perhaps that’s about to change.

Csapo and O’Brien are among 9 leaders in the recycling industry tapped by Governor Snyder to serve on a new Michigan Recycling Council. The body is charged with guiding implementation of Michigan’s Residential Recycling Plan, a new plan that addresses benchmarking and data collection of recycled materials, public education, increasing access to recycling, and market development. The plan is supported by a $1 million appropriation requested by Snyder for 2015.

Snyder recently announced the new council and plan on a tour of Clean Tech Inc., a manufacturing facility in Dundee, Michigan that uses recycled plastics to make food-grade and non-food grade packaging. Having access to local sources of recycled commodities would be a boon for Clean Tech and other Michigan businesses that rely on recycled materials as feedstock in their manufacturing processes.

“I think there’s a huge amount of potential throughout the state on market development,” says Matt Flechter, recycling and composting coordinator at the Michigan Department of Environmental Quality. “Most states have made a stronger effort than Michigan has to establish recycling markets for a variety of materials using typical economic development tools.”

In Emmett County, local leaders have been developing local recycling markets for years without much state leadership. Supported by a strong county solid waste plan and ordinance, Emmett County’s recycling center operates entirely without tax support, funding its operations with revenue from the sale of recycled goods. The county ordinance targeted a 40 percent waste diversion rate by 2012, which the county met, according to Lindsey Walker, outreach coordinator with Emmett County.

“It’s important to identify local markets because it makes a difference to the economy of Michigan,” says Walker. “We find viable and preferably local markets and manufacturers to turn that recyclable commodity into a new product.”

Emmett County sells marina shrinkwrap to Petoskey Plastics in Petoskey, juice and broth cartons to Great Lakes Tissue in Cheboygan, and roof shingles to Payne & Dolan, an asphalt manufacturer with offices in Michigan and Wisconsin.

Recycling just makes good business sense. That’s how Bill Gurn, maintenance manager at Holland-based Haworth, sees it.  The furniture company operates plants in Michigan, India, China, Germany, Switzerland, and Portugal, all of which, according to Gurn, are now landfill-free. This means they recycle virtually all of their waste stream.

“We began making a serious investment in recycling in 1992 when we built a 19,000 square-foot recycling center at the Holland plant,” says Gurn. “We went from 18 million pounds recycled that first year to 53 million pounds in 2010, generating annual revenue between $1.4 and $2 million per year from the sale of those commodities.”

After Haworth became landfill-free in 2009, it began implementing practices to reduce its waste, which has resulted in a decreased volume of materials processed through the recycling center.

“Our end goal is not to recycle everything that we scrap,” says Gurn. “Our next step should be figuring out how to reduce our scrap. So in 2010 we started tracking our seven largest waste commodities and challenged our manufacturing teams to reduce those volumes.”

As a result of these efforts, Haworth saw a 5 million pound recycling volume reduction in 2012.

“It reduces our operating costs, increases the profitability of the product and the company, and gets us down a path past just recycling,” says Gurn.

Market development is absolutely critical to driving Michigan forward in recycling, according to O’Brien.

But any market development program must start with a solid understanding of local resources, something Michigan sorely lacks today, according to Csapo. Snyder’s plan calls for enhanced monitoring and data collection of recycled commodities throughout the state.

“You can’t measure your progress toward a goal you can’t measure,” he says. “So that means collecting data and being able to understand the markets and what collections are out there and identifying ways to help make those B2B and B2C connections to help drive economic growth.”

To find out more about recycling resources in your community, visit the MDEQ’s website for local recycling contacts and click on your county.

This is the first in a series of special reports on Michigan public policy issues made possible through a partnership with Issue Media Group.

Julie Metty Bennett is an owner and senior vice president at Public Sector Consultants, a Lansing-based public policy research and program management firm. Issue Media Group (IMG) spoke with Metty Bennett to get her thoughts on what Michigan needs to do to improve its recycling performance.

IMG: Why does Michigan’s recycling rate compare so poorly to that of other states?

Metty Bennett: This is one of the challenges with the bottle bill. I think as a state, we should be very proud that the bottle bill causes us to recycle 97 percent of bottle purchases. But I think it’s given us a false sense of pride related to recycling in general.

It’s a pretty inconvenient and messy system and it takes a lot of effort to pay deposits, store containers, and then spend time to bring containers back to the store. People feel they have accomplished a lot by doing that, so when it comes to the detergent bottles and the tin cans, people are just throwing those in the garbage, and it’s a real problem.

IMG: How well does Michigan perform in recycling other materials beyond beverage containers?

Metty Bennett: First, I think it’s important to note that we really don’t know what our recycling rate is exactly. Michigan does not require waste haulers and municipalities to report how much is being recycled, and so they don’t do that. So we’re kind of guessing. Based on some estimates, we think Michigan’s rate is about 14.5 percent.

IMG: What does Michigan need to do to ramp up our recycling efforts?

Metty Bennett: If we really want to do better at recycling, we need to know more about how much we are already recycling. The state has a goal for a 50 percent waste diversion rate, but how are we ever going to know if we get there without tracking how we’re doing? Other states are much better at tracking this information. And we don’t do a good job of providing convenient access to recycling. For the recycling market to take off, it needs to be really easy and affordable for everyone.

IMG: How do other states with bottle bills compare to Michigan?

Metty Bennett: What we have found is that it doesn’t matter if a state has a bottle bill. You can have great recycling rates with a bottle bill or without one. But as common sense would tell you, if you have two systems (a state-run system for bottles and a second system for everything else) that it is more expensive overall. So our recommendation is to have a single system and to invest in it, especially because one of the most valuable recyclable materials is the beverage container and it hurts local programs to not have access to that commodity.

IMG: How can the state of Michigan play a stronger leadership stronger role in recycling?

Metty Bennett: I want to give a lot of credit to the governor who specifically said he wanted to get people recycling, and Michigan Department of Environmental Quality director Dan Wyant, who assembled a recycling workgroup to look at recycling issues.

Editor’s note: On April 14, 2014, Gov. Snyder announced a new recycling initiative that includes a plan of action for residential recycling with a focus on benchmarking and data collection, public education, convenient access, and market development.

I think the state needs to invest in public education to create a culture of recycling. We’ve sort of been led into thinking we are doing well because of the bottle bill, but containers are such a small percentage of our waste stream. And the state can also help to make it more affordable and convenient at the local level by helping to fund the basic infrastructure and providing technical assistance is important.
IMG: How would repealing the bottle bill impact Michigan’s recycling program?

Metty Bennett: I’m passionate about the whole idea of having the market work as it should. Some of that market failure is a direct result of the bottle bill. Although I have a soft spot in my heart for it, when you look at how markets work and talk to local recycling authorities, they need that material. People don’t think of it as a market, but that is how it functions. Removing the bottle bill by itself is not going to increase recycling; there are a lot of other things that need to happen first. But I do agree that having the bottle bill means more government intervention, so the market is not working the way it needs to.

Repealing the bottle will help make the market work better. Wouldn’t you rather just put your unwanted containers in your recycling bin? Not to mention the retailers for whom the bottle bill has created a very expensive and inconvenient collection and processing requirement, and one for which they are not well compensated.

IMG: How has your work helped to bring clarity to these issues for policymakers and the public?

Metty Bennett: This is a good example of  PSC’s role in the state—to look at these policy issues and inform them with data, so that we can conduct policy conversations based on facts and information, not emotion.