To most people, the term “nonprofit” conjures visions of benevolent institutions doing good work in communities, perhaps feeding the homeless or providing job training to ex-convicts on a shoestring budget, often in the face of long odds. 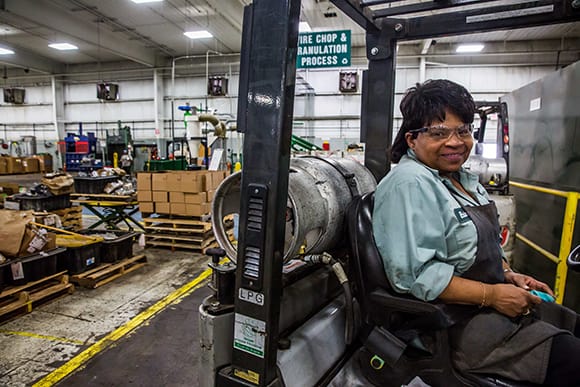 Goodwill Industries of Greater Detroit served nearly 12,852 people in Wayne, Oakland and Macomb Counties in 2013, and helped place 1,279 people into a job.

While those notions may be true, they don’t form a complete picture of the role nonprofits play in our communities, says Rob Collier, president and CEO of the Council of Michigan Foundations.

“More than one out of every 10 Michiganians works for a nonprofit,” Collier says. “The nonprofit sector is a hugely important piece of Michigan’s economy.”

That’s why the Michigan Nonprofit Association and CMF commissioned Public Sector Consultants to update an analysis on the economic benefits of Michigan’s nonprofits. The report, released on May 29, is the fifth update to the study performed by PSC, which also maintains a public website housing the information at nonprofit.pscinc.com. The first study was commissioned in 1999.

The associations found the lack of solid data about employment and wages in Michigan’s nonprofit sector to be an impediment to their ability to inform legislators and the public about the impact nonprofits make in communities. Surprisingly, while the U.S. Bureau of Labor Statistics collects detailed data on the labor force, these data are reported by industry and are not differentiated by the type of business entity.

“It was really groundbreaking work at the time,” says Jeff Williams, CEO of PSC, who worked on the original study, and on every update since.

“Michigan was one of the earlier states to do this kind of work,” he adds. “This was before Guidestar put all nonprofit reports online and only eight years after the Internet was invented. The data were available, but were restricted mostly to university researchers and major foundations. By working with the Urban Institute and National Center for Charitable Statistics, we were able to get data from the IRS in a form we could digest for Michigan.”

The 2014 update reveals that more than 1 in 10 Michiganians are employed in the nonprofit sector. That’s about equal to the number employed by durable goods manufacturing in the state. The nonprofit sector pays roughly $5 billion in wages per quarter to workers who provide vital health, human services, educational, and cultural services to local communities.

“That’s just a massive amount of money paid to Michigan workers, who then turn around and pay their rent and buy their food,” says Williams. “Nonprofits are one of the easiest things to overlook in the community–you don’t necessarily think of them as having a big economic impact, but they do.”

The report demonstrates the dominance of the health care industry as the largest source of employment in the nonprofit sector. Private colleges and art and cultural institutions are also important employers. Some of the state’s’ largest non-charitable nonprofits include the UAW Retiree Medical Benefits Trust, with assets totaling almost $55 billion in 2011. Other large nonprofits are the state’s larger credit unions and Blue Care Network of Michigan.

This update comes after Michigan legislators ended three charitable tax credits in 2011 that provided rebates of 50 percent for donations to community foundations, public institutions such as libraries and public radio, and food banks and homeless shelters.

“Such economic data have been important for us to show members of the state legislature and executive branch that, while tax policy doesn’t make someone donate gifts from the heart, it does influence how much people are able to give,” says Collier.

Indeed, a 2013 study by the Johnson Center for Philanthropy at Grand Valley State University showed losses of more than $1.12 million for 27 community foundations after Michigan’s new tax policy went into effect.

Collier’s organization uses the data to educate lawmakers from Lansing to Washington, D.C..

In addition to being broken out by sector, activity, region and county, the data gathered by PSC are grouped into legislative districts, which helps inform individual legislators about what is happening in their home districts.

“It’s very important for our legislators to understand their local constituency base,” says Donna Murray-Brown, MNA’s president and CEO. “When you can show a particular legislator which specific nonprofits are in their district and then say, “Guess what? One out of 10 people employed in your communities are more than likely working at a nonprofit,’ they begin to understand their constituency.”

Murray-Brown relies on the data daily in leading her organization.

“Many times, I am asked to speak about trends in the sector. I can do that from my gut and from reading the newspaper, but having the actual facts for the state of Michigan allows me to be able to speak succinctly about what is happening. It is critical for me to be armed with that information,” she says.

Individual nonprofits also use the data to make the case for their services when asking for funding.

“Most of my phone calls actually come from nonprofits that are writing applications either to a foundation or government, and they’re trying to show there is no overlap for services in their local community, or that the community they want to work in is underserved,” notes Williams.

Overall, PSC’s Williams is impressed with how well the nonprofit sector in Michigan survived the Great Recession.

“Nonprofits appear to have survived the crash better than the typical business,” he says. “Nonprofits are an integral part of the social safety net, so it is not surprising that they stretched every penny and every dollar after the financial crash, when they had massive demand for their services. I think they’ve done very well as a sector with the resources they had during a period of unprecedented demand.

“Michigan is fortunate to have such a healthy nonprofit sector helping so many families and the state at large.”

Gerrymandering: Picasso could not have done it better