Elda and Rafael Castellanos own El Comal, a restaurant in southwest Detroit featuring Salvadorean, Guatemalan and Mexican fare. Global Detroit helped connect the Castellanos to partner organization ProsperUS Detroit, a microlending organization that provides access to capital for small businesses that otherwise might not have access through traditional sources. 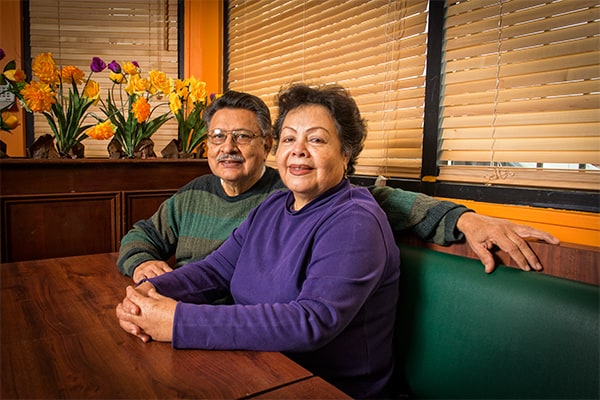 With President Obama’s new policy on immigration topping the headlines, Bright Ideas took the opportunity to chat with Steve Tobocman, director of Global Detroit, to find out how the Detroit-based nonprofit is working to leverage the talent and potential of Southeast Michigan’s immigrants for regional economic development.

Global Detroit offers a strong foundation of resources for immigrants to the Motor City and beyond. They have partnered with countless organizations to offer immigrants leadership opportunities, career assistance and more. Looking forward, Tobocman plans to work with Mayor Mike Duggan to create an Office of Immigrant Affairs, something he hopes will bring his vision of Detroit as “a welcoming city” to life.

“Immigration is a really important part of our economic future,” he says. “We need young, immigrant, working-class folks to revitalize our cities.” How does your work with Global Detroit help communities tap into the talents and resources of immigrant populations?

Global Detroit is a regional economic strategy that seeks to create job growth, raise incomes and create prosperity by tapping into the benefits immigrants bring to our regional economy.

It started with a study released in June 2010, which documented the impact immigrants have on the regional economy and made a series of recommendations. Over the last four years, we have been implementing

those recommendations and have leveraged over $7 million in corporate and philanthropic investment. Most of the work happens through partnerships.

Organizations we partner with include the Michigan Global Talent Retention Initiative. We also work with Upwardly Global, a national nonprofit that connects skilled immigrants and refugees with work authorization status to careers in their expertise.

Another partner is Welcoming Michigan, an initiative designed to create a welcoming atmosphere for foreign-born people in local communities. It is a program of the Michigan Immigrant Rights Center that was recognized in 2013 by the White House as one of ten Champions of Change for Immigrant Integration.

Where do you see Michigan’s position as a state on the subject of immigration?

Detroit and Michigan are very much on the forefront of what I consider to be a nascent movement of thought leadership that looks at immigration as an economic development tool and opportunity.

The Governor’s Office for New Americans is something that I think is inspired by our work, and something that we are close to. We are one of only three states that have such an office. The One Macomb Initiative has been instrumental in bringing this all together. There are four other Michigan communities — Detroit, East Lansing, Hamtramck and Sterling Heights — that have declared themselves “Welcoming Cities and Counties,” which makes Michigan the number one state in this national program.

We don’t necessarily have all of the programs and policies that the immigrant rights groups have championed. For example, we don’t have a state driver’s license for undocumented people, our language access programs are not as robust as some others, and we are working through law enforcement issues and in-state tuition equity issues. While we have made great strides, there is room for improvement on those issues.

But certainly we are nowhere near the kind of negative policies that we have seen in Alabama, Georgia and Arizona, which have really hurt those economies. Michigan is at the forefront in terms of looking at immigration as an economic development movement, which I think is a growing trend.

We are one of three states to have a Governor’s Office for New Americans; we were the fourth city to get a local office of the award-winning nonprofit Upwardly Global for skilled immigrant integration. Our Welcoming Michigan chapter is second to none. A lot of elements are in place, and when you look at the breadth of work Global Detroit has helped inspire, both the city and the state are very much a leader in the Midwest.

Which cities or states do you look to for partnerships?

We are staffing and have put together the Global Great Lakes network, and in the last four years alone, we have seen new immigrant economic development programs launched in Pittsburgh, Cleveland, Dayton, Springfield, St. Louis and Chicago. We work with programs in Indianapolis and Columbus, which are older programs but are now adopting an economic development focus.

In March, we worked with the Lucas County Board of Commissioners in Toledo, which has been actively planning its initiative to leverage the economic potential of immigrant populations. In Cincinnati, we have worked with the Chamber, the mayor and the city council on a government effort and a private sector effort. Also in Buffalo, we have been working with the International Institute of Buffalo and the mayor there has been working with them on developing and preparing for an initiative.

We have a dozen programs across a ten-state region that are either relatively new or in development, and Global Detroit is seen as a leader among these regional players.

What needs to happen to move your work on capturing the talent of immigrant populations forward from a political and a policy standpoint?

I say we are the envy of the country in having a Republican governor who understands the economic potential of immigration.

Obviously, the first thing is bringing awareness to the issue of the economic potential of our immigrant population. We are caught in a national hysteria and gridlock; we have somehow equated immigration with this issue of being undocumented. Particularly in the Midwest, immigrants represent untapped economic benefit and opportunity. They have tremendous education and entrepreneurship levels; they are the ones launching high-tech startups.

So, the first thing elected officials can do is help tell the story. Immigrants make jobs. They don’t take them. A second policy priority is to end this sort of witch hunt, this anti-immigrant policy in states like Georgia and Alabama and Arizona — many of these states have deportation-motivated policies, and the notion that over 10 million people are going to “self-deport” is ludicrous. What you are seeing in the case of Alabama, Georgia and Arizona is that legal immigrants have been caught in the crossfire. That happened in Michigan when I was a legislator in 2007, when the state issued a ridiculous legal opinion to interpret the residency requirement of the Michigan driver’s license, which took state residency and confused it with federal immigration laws.

If you don’t think that has real economic implications, you can talk to the Detroit Regional Chamber, which at that time was in India recruiting businesses to come to Detroit. In the middle of the meeting, the recruiters were shown a headline saying that skilled foreign workers in Michigan, who would be lawfully here under visa, would not be able to drive in the state of Michigan. Thankfully, we were able to work to rewrite the statute virtually overnight.

One answer is to not make the world any tougher than it needs to be on those who are here lawfully.

Where do Michiganders stand on immigration?