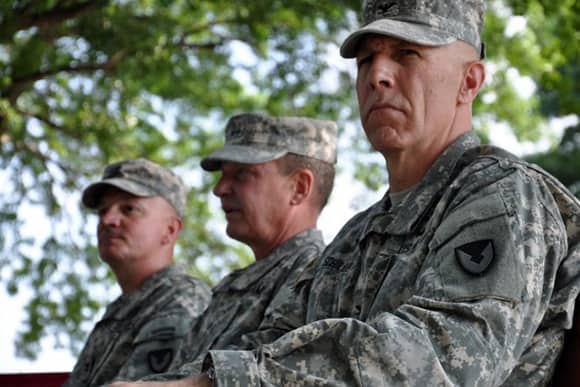 Most Michiganders think the state doesn’t give returning veterans adequate services, according to a recent poll from Michigan Radio and Public Sector Consultants. According to the Michigan Veterans Affairs Agency (MVAA), however, the problem is not a lack of services, but a lack of awareness.

The two-year-old agency was established by Gov. Rick Snyder in response to Michigan’s abysmal ranking in 2013 — 46th in the nation — in U.S. Department of Veterans Affairs (VA) spending per veteran. Veterans benefits can include everything from health care and monthly disability checks to life insurance, home loans and college or vocational training scholarships.

But hundreds of thousands of Michigan veterans still aren’t taking advantage of those services. According to The Detroit News, “Only 22 percent of Michigan’s estimated 660,800 veterans used their health benefits from the U.S. Veterans Administration in 2013 — the most recent year for which data is available.”

And Jeff Barnes, director of the MVAA, believes changing the public perception of services is imperative to connecting more veterans with the help they need.

One strategy involving the communities around Michigan is the Veterans Community Action Team (VCAT), which originated in Metro Detroit and West Michigan in 2013 and continues to expand to the regions throughout the state, providing thousands of veterans more opportunities with each expansion.

The VCAT program brings together service providers in each region to work toward finding ways to better serve veterans in their specific communities, including identifying gaps that need improvement. By building this tight-knit network, the hope is that a more cohesive region will make it easier to either help a veteran or point them in the right direction from the first point of contact.

The MVAA is also working on reaching veterans beyond those who have just returned from service — especially veterans who haven’t been in contact with the MVAA.

“It’s never too late to connect to your benefits. There have likely been changes and expansions that most veterans are not aware of,” Barnes says. “In Michigan especially, a lot of Vietnam and Korean veterans transitioned into the private sector, such as the auto industry, and they have not looked back at the VA for quite some time. With some of them not having the benefits that they thought they would at retirement, it may be time to look back at the VA.”

John Walheim, a World War II U.S. Coast Guard veteran currently residing in Suttons Bay, is among the veteran population who have returned to the MVAA and VA after receiving benefits earlier in their lives.

Using his GI Bill upon return from service in the 1940s, Walheim returned to the VA in his later years to subsidize the costs of prescriptions and checkups as well as traveling to the VA clinic in Traverse City at least once a year. Walheim acknowledges that his generation of veterans did not receive clear information on available benefits as troops do today, but has noticed positive shifts in VA-related services over the course of his lifetime.

“I feel the current course that the VA is taking is a good thing, with less restrictions on where care can be received and keeping appointments up to date,” he said.

As Walheim referenced, the MVAA is working on providing clearer information to veterans. For example, to better communicate education benefits, MVAA launched the Michigan Veteran Education Initiative (MVEI), which offers one-on-one educational and vocational training consultations to veterans who are interested in connecting with earned educational benefits, employers and vocational training.

Working to better inform veterans about these opportunities, MVEI Veteran Resource Representatives are now available on more than 15 college campuses across Michigan, helping veterans adjust to higher education by advising them on how skills they developed while serving transfer to civilian and academic life.

Increasing the presence of these representatives on campuses not only increases the support to veterans who are currently utilizing education assistance, but also helps improve awareness that education assistance is in fact available and being used by other veterans.

Jeff Cassidy, who served on active duty in the Army between 1994 and 2001, is one of the veterans who takes advantage of postservice educational opportunities, crediting the GI Bill’s vast financial coverage for the breadth of his education. Cassidy, who now works as a health care analyst for the MVAA, is two semesters away from finishing up his master’s degree.

“After about six months from returning home, I started going back to school and used my post-9/11 GI Bill,” Cassidy said. “Without my GI Bill, I probably wouldn’t have been able to afford to go to college and wouldn’t be where I’m at today. It’s been a godsend.”

From January through May 2015, MVEI provided 700 Michigan veterans, like Cassidy, with education-based consultations.

More one-on-one interactions with certified counselors, officers and representatives seem to be a step in the right direction for all areas of veteran services, not just education. Support to help veterans complete disability claims appears to be on the rise — incomplete paperwork decreased from 93 percent before 2013 to 59 percent in the fall of 2013, and claims processing time was also reduced.

By using more individual-based approaches and continuing veterans services conversations, Barnes and his MVAA team are preparing to assist every eligible veteran to the best of their ability, and bridge the disconnect between public perception and the state’s efforts to improve veteran services.

The increased efforts have so far proved successful, as The Detroit News stated that according to National Center on Veteran Analysis and Statistics data, Michigan has moved ahead of New Jersey, Delaware, Pennsylvania and Indiana in per-veteran spending with $5,000 per veteran in 2013.

That’s still below the national average, though, which is why the MVAA needs to stay dedicated to improvement.

“What you’re going to see with veteran benefits moving forward will be more adaptive to our veterans and be closer to where they live and work,” Barnes said. “Our goal is to keep sustained contact. We’re becoming more proactive in the community rather than waiting for them to come to us.”