For an entire day, no phones were answered, no e-mails were replied to and no texts were sent. Instead, Public Sector Consultants’ staff unplugged for a daylong retreat to make sure the company was on track with executing a strategic plan to achieve its 2023 vision. 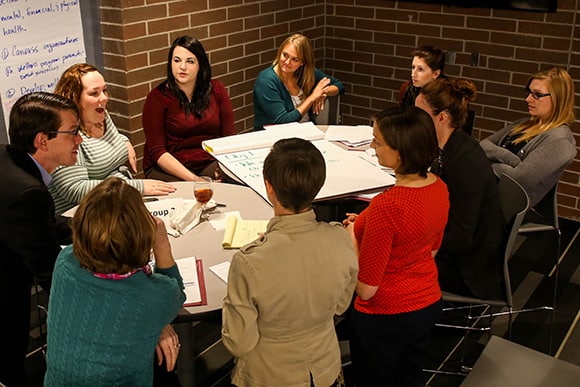 The plan is organized around four goals that focus on different aspects of the firm: the financials, talent recruitment and retention, branding and the firm’s reputation for quality. Work on the vision and plan began in 2013 following a leadership transition. At that time, partners CEO Jeff Williams, president Peter Pratt and senior vice president Julie Metty Bennett, sought the help of Zingerman’s ZingTrain—a nationally recognized leadership-development and business-training program—to assist in crafting a vision and developing the process by which PSC would detail, monitor, update and achieve it.

For two days, the partners worked with ZingTrain to write their own separate visions for the firm, and then came together to compare notes. The three found their visions were very similar.

When the two-day training was over, the partners drafted a shared vision and solicited feedback from PSC staff to encourage greater ownership and buy-in. The result was a much deeper, more comprehensive vision.

Not only were staff able to offer input on the vision, but four teams—or goal groups—were created and charged with further developing the plan and bringing its goals to life, mostly by articulating clear objectives and action steps. This systematic, firmwide approach gave each employee responsibility for moving the company’s plan forward.

The November 2015 gathering was the first of the company’s annual retreats where the entire staff could come together to review each group’s progress toward achieving the firm’s current goals and, ultimately, its 2023 vision.

Well, Zingerman’s food was a big draw, of course (laughs). But really there were two reasons we decided to work with ZingTrain. First, PSC’s partners have all read the books by Zingerman’s cofounder Ari Weinzweig, and we like his management style. Zingerman’s involves its entire staff in planning and leadership development, and we share their thinking on that subject. We also like that while Ari is a good leader, he’s also the guy who fills the water glasses at the restaurant. That is similar to the culture we’re trying to cultivate here.

Second, we thought it was important to work with a third-party instead of trying to lead our own strategic planning effort. While PSC facilitates strategic plans for our clients all the time, particularly around public policy outcomes, we believe plans are most effective when an outside organization manages the process. That way, the client—in this case us—can listen and contribute feedback instead of worrying about producing documents and running the meetings. The ZingTrain team has a fantastic reputation for planning and development, so we decided to put our trust in them.

All PSC staff members were able to give feedback after the vision was drafted. What was the benefit of having firmwide involvement from the beginning?

We’ve found that people work harder and find fulfillment when they feel like they have a role in their company’s success instead of merely being a cog in a machine. I know that I don’t want to work at a place where the partners are the only ones driving the agenda. I want to work in an organization where everybody has a voice, not just in strategic planning but also in the decision-making process. If there’s something people think is important to their success and to the health of the company, then there has to be a way for them to engage and exercise their influence.

The four goal groups that were created allow staff to be really hands on in implementing the strategic plan. How do these groups help drive the plan forward?

We are so busy doing work for our clients that we tend to put ourselves last. If we didn’t integrate our strategic plan into our day-to-day systems, it would become a low priority and just sit on a shelf. So, where we could, we tried to integrate the plan and its implementation into the work we do every day. Beyond that, we needed a new structure to ensure that we remained focused on moving the plan forward. That’s where the idea of creating goal groups came into play. You have a group of people focused on achieving a specific goal, and each person in the group is responsible for a specific action step. In that way, everyone is invested in and accountable for implementing the plan and, ultimately, achieving our vision.

How did you place employees into goal groups?

People indicated which areas they were interested in, and we tried to put them in a group that matched their interests. We also tried to make sure that each group had people from different levels and content areas. After the assignments were made, we gave people the option of moving to a different group if they wanted to, but no one has taken us up on that so far.

Did you have any expectations for the goal groups in their first year?

I probably set a low bar because the groups were new, but we did a lot more than I expected, particularly given that implementing the plan’s action steps is just one more responsibility on top of all the other duties we have. A few things happened more slowly than expected, but many things were knocked out right away. For example, in the first month of implementation, we created a PSC Red Team, which is a small, interdisciplinary group brought together to solve a particularly challenging problem that arises unexpectedly and has to be addressed in a timely manner. We’ve already used the Red Team problem-solving approach three times.

What do you enjoy most about being in your goal group?

Brainstorming around a table with people I don’t typically work closely with is really satisfying. It energizes me. Within my group, I see people getting really excited about working together on the firm, and that makes me smile. We’re learning from each other, which strengthens our relationships.

How will this year’s retreat shape next year’s?

We’re currently in the process of getting feedback on the retreat, so staff input will help us shape what happens next year. One of the things I would like to see is a more concerted effort to mix people up instead of having them siloed in their goal groups for most of the day. We also had a session during this retreat on how to measure progress and success. That conversation was really important because we’re doing all this work on the firm for a reason: if we’re not monitoring our success—whether or not we’re moving in the right direction—then we’re just spinning our wheels. Next year, I think it’ll be easier, because we’ll have a team thinking about metrics all year long. So, instead of starting from a blank slate, we’ll have something to reflect on and fine tune.

Did the strategic planning retreat meet the partners’ expectations?

It definitely met my expectations. I thought birthing the plan was pretty challenging, so it was nice to see that a lot of the heavy lifting had already been done. Now we’re in a groove, and the work surrounding the retreat was less taxing than I expected. There was still a lot of thinking, talking and voting, but we certainly weren’t starting from scratch, which was nice. I thought it was a great day.

Looking at things from the partners’ perspective, this is the realization of something we’ve wanted for a very long time, and we’re extremely happy with where we are. We can say with a pretty high degree of certainty that the staff generally feels included in the decision-making process and that their voices are being heard. The strategic plan has helped us become very intentional about it. As a company, we’ve grown a lot in size. The partners all remember when there were fewer people working here, and soliciting feedback was pretty easy and could be done in a more casual or informal way. Now, with nearly 40 staff and increasingly larger and more complex projects, we want to make sure our growth is happening in a way that’s consistent with our company’s values.

Michiganders’ voices heard on issues ripped from the headlines