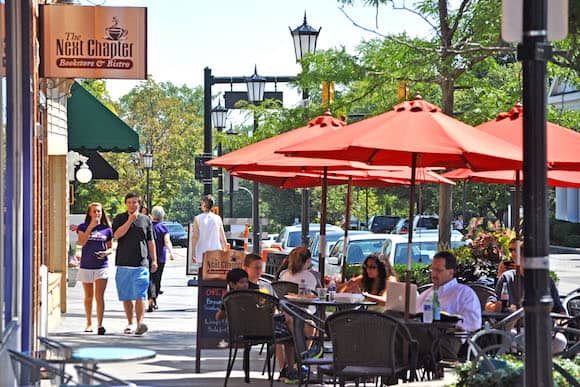 With so many headlines broadcasting the challenges facing our cities — from struggling schools, crumbling infrastructure and a lack of affordable housing to food insecurity and precarious finances — it is unclear whether city managers and local government officials have any arrows left in their quivers to sustain and revitalize their communities.

Leaders of smaller towns aren’t faring much better. They are constantly grappling with issues related to poverty, access to health care, an aging population and development (or a lack of it).

“The Michigan Municipal League asked if we could evaluate the relationship between a community’s quality of place and economic growth,” says Shanna Draheim, senior consultant at PSC. “Our findings are pretty compelling.”

The report contains a list of investments leaders can consider making, alone or in concert, to help their communities grow and prosper. For example, it shows that mixed use, walkable downtown developments have direct economic benefits. They generate ten times as much tax revenue per acre, save almost 40 percent on upfront infrastructure costs and result in about 10 percent lower costs for service delivery than sprawl development.

And increasing walkability is something any community can achieve.

“Communities that are not investing in one or more of these assets — and states that are not supporting their communities’ efforts to do so — are going to be left behind.”

“Whether your town is large or small, you need to think about zoning and master planning in a way that promotes walkability and good physical design,” says Draheim. “Are you requiring sidewalks in new housing developments? Are you connecting streets rather than having lots of dead ends?”

These steps don’t necessarily require an infusion of cash — just a change in policies, zoning requirements and/or design approaches.

The league identified these areas through its public policy forums, research and education.

“We received a grant from the Michigan State Housing Development Authority, which was instrumental in helping us identify cutting-edge, creative solutions for creating better, stronger communities,” says Dan Gilmartin, executive director of the league. “PSC helped us determine the potential economic benefit of each of those solutions.”

Draheim notes that this is where PSC’s report differs from most work done in this area.

“For years, communities have talked about placemaking as a great way to attract people and businesses, but they haven’t really articulated what the economic return looks like,” she explains.

When they have, they typically rely on just one economic indicator: property values. This report, however, covers a range of measures, including income, employment, property values, educational attainment in the workforce, and new business starts.

So what else — besides making downtowns mixed-use and more walkable — can communities do to encourage growth and prosperity?

Among other things, the report recommends:

While investing in any one of the eight assets can help make a community better, they have even more power and impact when executed together. For example, if a community has a dense, walkable downtown with multiple transit stops and a number of arts and cultural offerings, these assets work together to make it a desirable place to live. That, in turn, attracts more highly educated, talented and diverse populations, which makes the area more attractive to a broader range of businesses.

“If you layer the options and weave them together, you get even more bang for the buck,” says Draheim.

When asked about where communities should start when determining which assets provide the most potential, Gilmartin offers this advice: “Start by looking at what you already have. If you don’t have art galleries and theaters, you probably don’t want to try to make your community a haven for artists and actors. But you may have a festival, a historical museum, or a couple of tech companies. Those are things you can build on.”

Similarly, small communities aren’t going to benefit from creating their own transportation systems, but they could reach out to regional authorities and encourage them to put a stop in their town or work on connecting nearby areas with a system of walking and bike trails.

Given growing concerns about the economic struggles that many Michigan communities are facing, the PSC report could not be timelier.

“Communities that are not investing in one or more of these assets — and states that are not supporting their communities’ efforts to do so — are going to be left behind,” says Draheim. “People are going to choose other places, in and outside Michigan, to live and work.”

In that sense, the community assets discussed in this report are, perhaps, less arrows in a manager’s or local government official’s quiver, and more a necessity for survival.

Striving for more graduates in Michigan