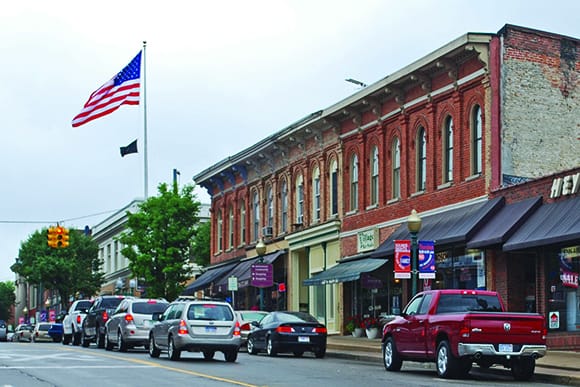 Defining problems and solutions through facilitation, strategic counsel and strategic planning is the focus in this installment of In the Gears, a series that highlights the tools PSC uses to turn the gears of public policy innovation. Other focus areas include research, implementation and evaluation.

When Gov. Rick Snyder announced his statewide Regional Prosperity Initiative in 2014, it was billed as a means of encouraging local partners to create vibrant regional economies. The RPI acknowledged that many Michigan regions and their myriad of planning and service delivery entities have overlapping responsibilities and lack a shared vision for economic prosperity.

While the program is intended to help regional partners come together to identify a common vision and identify ways to reduce redundancies and gaps in service delivery within their regions, in many areas it meant sweeping change, a redefinition of long‐​established geographic regions, consolidation and the forced partnership of organizations that had never worked together before, or worse, had adversarial relationships. Though the program is voluntary, funding and grants are only available to those regions participating in the RPI, providing substantial motivation for participation.

One of the regions facing the biggest changes was the Region 9, covering Hillsdale, Jackson, Lenawee, Monroe, Livingston and Washtenaw Counties. The region’s two largest cities — Jackson and Ann Arbor — had always functioned as their own regions, and the newly defined region now included a number of rural counties facing their own unique struggles with transportation, employment and economic development.

“When the whole Regional Prosperity Initiative began, it was a confusing and scary time for all of us,” says Sarah Hartzler, president of South Central Michigan Works! and a member of the Region 9 Prosperity Management Team, a group of six leaders from key partners in the region committed to seeing the RPI succeed. Bringing together the regions and dozens of partners was a daunting prospect, especially in an area where the regions had previously been in competition for talent, jobs and dollars.

Region 9 was awarded grant funds to help with the massive effort by creating a five‐​year prosperity strategy to build the new regional relationships and smooth the process of working together to enhance economic prosperity in the region. PSC worked with the management team to help define the problems facing the region and bring diverse stakeholders to consensus on a direction forward to ensure future economic prosperity, ultimately creating the Region 9 Prosperity Initiative Five‐​year Prosperity Strategy.

“They helped us drill down to the issues that were at heart and keep our focus,” Hartzler says.

And it was no easy task.

“You had a group of people who were conceptually brought into the idea that they should be collaborating and working together, but who are trying to determine how best to partner. The region was defined for them and they weren’t sure it was their natural region,” says Draheim. “We had to help them realize, it doesn’t really matter. There are a lot of ways to define a region, to collaborate and to cooperate. At the end of the day, there is a reason to come together and there were already a lot of ongoing partnerships across the counties to build off of.”

With more than 70 stakeholder organizations involved in the planning process representing education, economic development, transportation and workforce development, PSC’s role as an outside facilitator was key in defining the problems and solutions.

“We aren’t located in the region and don’t have any vested interests,” Draheim says. “We bring a methodical and unbiased understanding of regional economic development and policy that helps Region 9 partners focus on their priorities.”

PSC worked with the Prosperity Management Team to establish smaller teams that went through a process of assessing regional assets and needs, identifying key regional goals and objectives, and developing strategies for addressing talent and transportation issues over the next five years.

The work included monthly (or more) meetings; surveys of the dozens of public, private and nonprofit organizations participating on the teams; and collection of talent, economic development and transportation data.

“One of the great things we were able to accomplish is understanding this is a project about expanding the ability to provide services to our customers,” Hartzler says. “What’s duplicative? What can we do collaboratively? It caused people to sit back and evaluate what they’re doing every day and it became clear the overarching vision at the beginning really did have meaning.”

The work also included facilitating difficult and contentious conversations about resources, the vast differences between the urban and rural areas in the region, and in some cases, the consolidation of services.

One example: Looking at four Michigan Works! agencies across six counties and asking them to become one.

“That is a huge issue to be able to take on,” Hartzler says. “PSC did a great job of leading us through those discussions and focusing on moving forward. They did an excellent job of helping us realize how essential it is for us to provide the best services to our customers.”

With the Region 9 Prosperity Initiative Five‐​year Prosperity Strategy now in place, efforts have shifted from discussion to action — namely putting the work group strategies into place and tackling the best structure for collaboration moving forward. PSC is currently researching regions around the country that have implemented successful prosperity efforts to guide Region 9.

“These organizations all have worked together for many years at varying levels, but they hadn’t ever worked together under the mantle of this program,” Draheim says. “That’s why it was so important to involve an organization like PSC, which brings a broader statewide perspective, but also helps guide a more structured conversation about what’s best for the region.”

The Michigan Clean Energy Reports: A look at clean energy