A partnership among Michigan’s Office of Great Start (OGS), Public Sector Consultants and early childhood organizations has yielded $52 million in new federal funds to help hundreds of thousands of Michigan children access high‐​quality preschool — something now out of reach for many struggling families who are often forced to make trade‐​offs between rent, utilities and food. 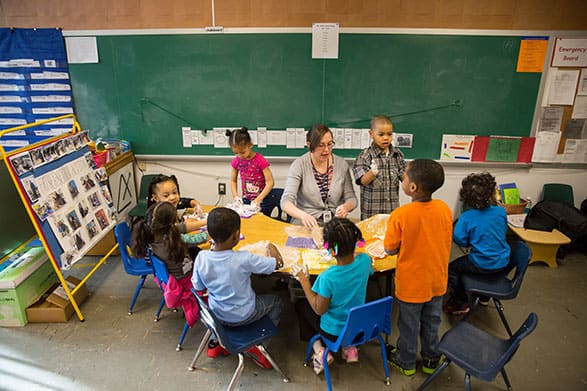 An estimated half of all children in Michigan between the ages of 0 and 5 live in families with an income of 200 percent of the federal poverty line ($47,700 for a family of four) or less.

Reams of research demonstrate that low‐​income children who receive quality early childhood education and care enter kindergarten ready to learn — while many of those who do not receive such care start behind and never catch up.

“We already know that, by kindergarten, kids who start behind stay behind,” says Susan Broman, director of the OGS.  “By providing quality preschool, a number of kids will actually get on track — and stay on track. We’ve been able to demonstrate in a longitudinal study in Michigan that, in fact, children who benefit from our Great Start Readiness Program (Michigan’s preschool program for low‐ and moderate‐​income children) are more likely to graduate on time, do better in school and be better behaved in school than children without such services.”

Thanks to the $52 million federal Race to the Top Early Learning Challenge Grant, the OGS will begin efforts this year to increase the quality of child care for Michigan’s youngest low‐​income residents.  Public Sector Consultants assisted the OGS in preparing the federal grant application, which was one of only six selected across the nation.

“There is a lot of agreement that Michigan needs to improve the quality of child care,” says Peter Pratt, PSC president. “That federal funding will help us implement a number of recommendations in the state’s early childhood plan.”

Race to the Top will have a strong focus on home and family child care settings, because that is where the majority of low‐​income children are receiving care.

“If we look at where our children are who receive the child care subsidy, approximately 65 percent of them are in friend, family, or neighbor care,” says Broman. “So what we’re trying to do is improve the quality of that care.”

The grant will provide a suite of incentives for home child care providers to improve the quality of their child care settings and their own skills.

“I call it quality improvement on steroids,” says Broman. “Basically what the $52 million will allow us to do is give incentives and bonuses that might entice more family providers into Michigan’s Preschool Program Quality Assessment (PQA) system, in addition to delivering money for education and grants to improve preschool program quality. Those grants could be used for physical improvements to homes and instructional materials, among other items.”

The federal money is the latest in a series of milestone investments in Michigan’s early childhood learning program in recent years, starting in 2011 with an executive order by Gov. Rick Snyder creating the OGS and charging it with achieving four primary outcomes: children are born healthy; children are healthy, thriving and developmentally on track from birth to third grade; children are developmentally ready to succeed in school at the time of school entry; and children are prepared to succeed in fourth grade and beyond by reading proficiently by the end of third grade

“Basically, the governor started by consolidating the major early learning programs, but he also recognized that if we are trying to address these four outcomes, there will need to be a lot of collaboration within many state departments that impact early childhood,” says Broman.

In 2013, after a push by Governor Snyder, the OGS, the Children’s Leadership Council of Michigan (prominent business leaders from across Michigan who support wise early childhood investments) and other advocates, the Legislature boosted funding in fiscal year 2014 by $65 million for the Great Start Readiness Program.

The boost was the largest public preschool expansion in the nation, according to an analysis by Bridge Magazine, affording preschool access to an additional 10,000 4‑year‐​olds in Michigan. But that still leaves an estimated 20,000 youngsters not enrolled.

Governor Snyder has requested an additional $65 million for GSRP for fiscal 2015, which will bring total investment in the program to $239 million, more than doubling the state’s investment from two years ago, says Broman.

To achieve the governor’s vision, Broman convened stakeholders to create a plan of action to achieve the four outcomes while increasing the quality of early childhood services.  With the assistance of PSC, the OGS coordinated a statewide effort to garner the input of more than 1,400 parents, advocates, policymakers, service providers and educators, resulting in the Great Start, Great Investment, Great Future Plan for Early Learning and Development in Michigan

The plan makes the economic return‐​on‐​investment case for early childhood learning and lays out a framework for achieving the four outcomes.

“Having the input of 1,400 people is something I am very proud of,” says Broman. “It gave us a platform to be able to successfully apply for the Race to the Top.”

“I was impressed by the consensus,” says Pratt. “The recommendations that found their way into the plan were very clearly the most important things we need to do to improve early childhood in Michigan.”

PSC is now coordinating with the OGS to gain input from educators and others on implementing the recommendations in the Great Start, Great Investment plan.

Scott Menzel, superintendent of the Washtenaw County Intermediate School District, sees a clear benefit of the OGS in his county.

“We’ve seen over time a willingness of the OGS to work with people in the field to insist on high‐​quality programs,” says Menzel. But, he adds, much remains to be done.

“Programs and services to meet the needs of children from birth through age 3 fall short,” says Menzel. “A review of the Early On Program  put us somewhere in the vicinity of $40 million short of providing the required service. So, for me, the next step in this process is turning our attention to the first three years of life.”

According to Broman, adequately addressing early childhood learning and development will require a fundamental shift in thinking on the part of the public and policymakers.

“One of the significant challenges in doing early childhood work is translating what we know about early brain development research into public policy,” she says. “We know the return on investment is phenomenal, but, as a society, we seem to not have a problem paying for remediation, but don’t always warm to paying for prevention and early intervention.”

Broman sees her immediate challenge as coordinating the myriad social services that already exist to make sure Michigan is most effectively delivering them to the populations that need it most.

“It means that we have to do a lot of silo‐​busting,” says Broman. “To achieve the larger vision is tough work.”