For anyone driving into Michigan from a bordering state or from Canada, the situation becomes immediately clear: Michigan’s roads are crumbling beneath their tires. While that’s nothing new, officials say the situation has gone from bad to worse to critical. 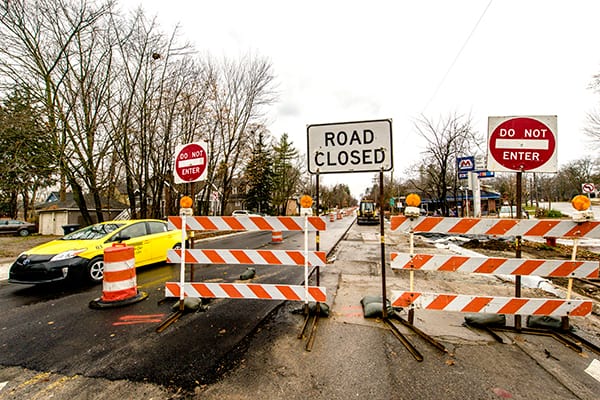 According to a Nov. 20 press release from the Southeast Michigan Council of Governments (SEMCOG), only 14 percent of the roads in Southeast Michigan are in “good” condition. Half of the remaining roads are in “poor” condition, meaning they need to be rebuilt completely. The other half, in the “fair” category, need preventative maintenance to keep from sliding into the “poor” category, as unmaintained roads exposed to heavy traffic and Michigan’s freeze/thaw conditions are wont to do. Between 2012 and 2014, 500 miles of Southeast Michigan’s roads did just that.

Across the state, conditions are in rapid decline:

What does this mean for Michiganders?

Michigan’s road funding formula is complicated and heavily reliant on a flat gas tax of 18.7 cents per gallon that is immune to inflation, which means that with each passing year, the state’s capacity to pay for road repairs diminishes.

“Revenues haven’t kept pace to keep us in a good condition,” says MDOT Director Kirk Steudle. “We’re about ready to see some very rapid deterioration in the next two years, because inflation has eaten into the tax. So, we can buy a lot less in repairs.”

Michigan is dead last among the 50 states in road investment, at $154 per capita annually, and trails other Great Lakes states by $60 to $376, according to 2010 Census data.

“You’ll see us at work on a good road, doing preventative maintenance repairs,” says Steudle. “In fact, we get criticized for that sometimes, but it’s cheaper to keep a good road in good condition than it is to totally rebuild one. We do midlife interventions, adding somewhere between eight to 15 more years of life to that existing pavement.”

Once roads have slipped from the “fair” to “poor” category, fixing them becomes a much more expensive proposition.

Years of trying to do more with less has made MDOT leaner than ever. Since 2010, MDOT has saved $195 million through innovative, streamlined processes, such as bonding and process improvements, reducing staff, closing facilities and using electronic signatures for construction documents. But there is little fat left to trim.

Years of legislative paralysis on this issue has led local communities and business groups to take matters into their own hands. The Michigan Chamber of Commerce has said it will initiate a ballot proposal to fix Michigan’s roads if no action is taken during this lame duck session.

“I hope it doesn’t come to that because, frankly, this is something in the Legislature’s power and we can do this,” he says. “This is maintaining a core asset of the state. If a ballot referendum is how we should fund it, then why do we have the Legislature?”

In the meantime, numerous counties and local governments are raising their own funds to fix roads. In November, four of five local road funding measures on the ballot were approved. Grand Rapids residents voted in May to tax themselves to raise $9 million annually through 2030, and Midland, Eaton, Otsego and Ottawa counties voted in November to approve local road millages.

But can these local efforts solve the problem?

“No, not at the end of the day,” says SEMCOG Deputy Executive Director Carmine Palombo. “They can’t do it all. A lot of people are saying, ‘Well, to the extent that all of these local communities are passing these millages, it takes the burden off the state to solve the problem.’ And my response is no, it doesn’t. The only revenue source that will provide enough funding to improve the situation is a state tax. Local communities are really just passing relatively small millages to address the most important issues in their communities.”

Immediately after reelection in November, Governor Rick Snyder reaffirmed his call for legislators to raise an additional $1 billion per year for road repairs. It’s not yet clear whether that will be enough to stem the tide of disintegrating pavement.

“The governor, a couple years ago, asked for $1.2 billion,” says Senior House Fiscal Analyst William Hamilton. “Some studies of the issue say we need to raise an extra $2 billion or $3 billion.”

Hamilton points to an array of legislative bills in various states of execution. A Senate bill passed on Nov. 13 would create and slowly increase a wholesale gas tax to raise $1 billion per year. That bill is now headed to the House. House Bill 4630, which has seen no action since June, would raise vehicle registration fees. House Bill 5459, which would increase the portion of the state sales tax dedicated for transportation, has seen no action since May. Finally, House Bill 5453 was passed by the Senate on Nov. 13 and would increase fines on overweight vehicles. (Meanwhile, a bill that would have reduced truck weight limits was recently defeated in the Senate.)

“These are all works in progress,” says Hamilton. “Not one of these is going to be enacted in a current form.”

Public Sector Consultants Vice President Jeff Guilfoyle points out the need to tie road funding source directly to inflation — something none of these bills accomplish.

“Increasing the gasoline tax, I think, is the most logical thing to do,” says Guilfoyle. “I think the easiest solution is simply to index tax rates to inflation for whatever you want it to grow by, but I think that that has been viewed as politically difficult rather than difficult from a policy standpoint. And so what we see instead are proposals to levy a tax on the wholesale price of gasoline.”

Guilfoyle notes that while the wholesale price presumably will increase, it’s very unpredictable. But tying the road tax directly to inflation has proven untenable elsewhere; Massachusetts recently voted down just such a proposal.

“Sometimes gasoline prices stay stable for a very long period of time, like they did in the ’80s,” he says. “Sometimes they spike really sharply and go up very quickly if you have some kind of oil crisis. Other times they fall significantly, as we’ve seen them fall recently, and back in 1998 when we had the Asian financial crisis. You run the risk that your revenues are going to bounce around; they’re either going to go up faster than you want or down faster than you want. What you see in some of these proposals is they put a cap on how high the tax can go, and a floor on how low the tax can go. It’s kind of like they’re trying to force the tax to grow at something closer to the rate of inflation, when really the easiest solution there is just to index it to inflation. That’s really what you want at the end of the day.”